(Disclaimer- I was getting ready to do some blog updates and was super confused why my 2016 Book Challenge count didn’t add up to the number of months so far this year. After some head scratching and bafflement, I realized that I had somehow never posted the August review, even though it was sitting in my finished folder! So, as you all eagerly await not only September’s challenge book, but also the upcoming blog changes, here is August’s challenge entry. Apologizes for the ridiculously late post.)

2016 Book Challenge: A Book You’ve Been Meaning to Read 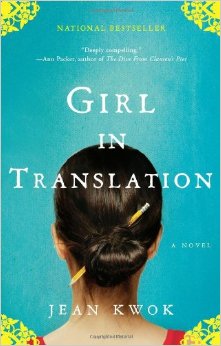 August was a hectic month, part of it spent in Idaho and the rest taken up with a move to our nation’s lovely capital. With all of the upheaval, I was still able to enjoy reading my way through eleven books, mostly new release fiction, but I did manage to get a couple of narrative non-fiction titles in there, including my favorite recommendation right now, Patient H.M.  by Luke Dittrich. The one that breaks from the new release tangent I was on is this month’s 2016 Book Challenge Book, falling under the category of “a book I’ve been wanting to read.” Girl in Translation by Jean Kwok has been on my “to read” list for several years now (it was published in 2010), but kept getting pushed off until late one evening I was lying in bed, having finished my previous book (Miss Jane by Brad Watson- fantastic!) and had nothing in my queue. (The horror!) With a few clicks I was on the Boise Library website, searching for something intriguing that was currently available. Not too far through my scrolling, I came across Girl in Translation  and remembered that I had wanted to read it before, so a few more quick clicks and it was on my ereader.

With a soft spot for Chinese-themed literature, I was instantly drawn into the narrative of Kimberly Chang, a young girl whose mother immigrates to the United States from Hong Kong, searching for a better life for herself and her daughter. Not just a story of a hard working mom and a high-achieving daughter, this book digs into how easy it is for jealous to erupt and how difficult it can be for families to feel as if they are being left behind when success comes to some but not all.

Immigration stories are such powerful narratives, bringing together the hopes and dreams of generations, but when well-written, also explore the difficulties in not only achieving those dreams in a mere generation, but also the conflict that occurs when the next generation doesn’t understand the history that has lead them to their current life. Coming to America may seem like an easy decision, but it can be powerfully painful and great literature shines a light on the complexities of what it means to “be American.” (I highly recommend the recently released Behold the Dreamers  by Imbolo Mbue, about a Cameroonian family facing difficult decisions about how much citizenship is really worth.)

Girl in Translation  was a quick read, but I must admit to being frustrated with the ending. Without needing a spoiler alert, I will say that I think Kwok’s ending was a bit unrealistic and left me with many questions, not only in terms of logistics of the way the story wraps up, but with inconsistencies in the character portrayal as well. Nevertheless, a disappointing ending does not turn me off to the book as a whole and I’m glad I finally took the chance to pick it up, albeit six years later.

(A Doubter’s Almanac by Ethan Canin)

(Girl In Translation  by Jean Kwok)

_____ A book recommended to you by a librarian

(The Hounds of Baskervilles by Arthur Conan Doyle)

(And Then There Were Noneby Agatha Christie)

(A Clockwork Orange by Anthony Burgess)

_____ A book you abandoned previously

(I am Nujood, Age 10 and Divorced by Nujood Ali)