Osaka’s skyline rests across the bay from where I currently sit, laid out on a lounge chair in KIX, an international airport with the feel of small, regional airport. Out the window, on the left side of the panoramic view, runs a long bridge, connecting the airport to the city, looking as though it will collide with a huge building that towers over all everything else on the horizon. As I scan to the right, my eye is caught by a large Ferris wheel that sits right on the water, making me think this city might have more personality than first meets the eye through the haze. (Fog? Smog? I’m not sure what is causing the gray out there today, but gloom is definitely the overriding feel.)

I’ve been in this airport since 7AM, which means I’ve roamed its compact hall for six hours now, with at least three more to go. While the sign may say international airport and the planes come and go from international destinations, the concourse speaks a different tale. There are two cafes in the terminal, both small and both serving very little other than coffee and tea. Luckily, I had packed Pop Tarts in my backpack to tide me over, knowing I wouldn’t want much from my plane meals (and not having my favorite travel companion to swap out my entrée for his roll and brownie), so those became breakfast at KIX. Hours later when lunchtime rolled around, I revisited my two café options, finding the afternoon choices limited to hotdog-like meat wrapped in bread or shrimp ramen. Neither of these options was going to hit the spot, so I stepped into the one convenience-type store in the concourse. Stepped in is a bit of a stretch, as the shop was small enough that as my body was inside, my backpack remained outside. Not a lot of room to browse or turn. I quickly grabbed a few things I could recognize, (Pringles, a Coke and a weird little waffle thing), opting not to try the freeze dried tentacles, even though they were quite easily recognizable!

Between these two meals, both of which would make any nutritionist cringe, I did discover a hidden row of lounge chairs, making the perfect place to take a nap. Not far off the beaten path, these plush chairs had little cubbies around the top half, giving the sitter the feel of being in his/her own little pod. I knew I had found my home for a few hours! Pulling my ever-handy travel blanket and pillow out of my backpack, I kicked off my shoes, stashing them under the chair and tucked my bag in the space between the chair and the surrounding cubby and curled up for a mid-morning siesta. When I laid my head down, the closest gate was still occupied by the Malaysian Airlines plane I had come in on. When I finally pried my eyes open two hours later, those red and blue markings had been replaced by the green and red of Eva Airlines. Time passed. Planes moved. I slept.

Now, well-rested and kind of fed, I should be working on my thematic paper for my one of my literature classes. The ideas are all there, bouncing around my head: Tom Bissell, Uzbekistan, Peace Corps, the Aral Sea, the inner journey of a travel writer–bounce, rattle, rumble. The problem is, those ideas are competing for my attention with the planes that keep rolling up and down the runway, the boats trailing through the harbor (Is that a harbor? The ocean? A river? I have no idea what the body of water that lies between the Osaka airport and the city is.) and the strangely hilarious FaceTime conversation of the pre-teen in the next lounge cubby over. (Things I know about my cubby neighbor: She has an American accent. She is on my flight to SFO in a few hours. She is eating a sucker, loudly. I am pretty sure she memorized some list of current slang, using all of it much more liberally than any self-respecting tween should. Occasionally you have to use a full word in a sentence, even if you are talking to your bae and are totes excited to see her.) 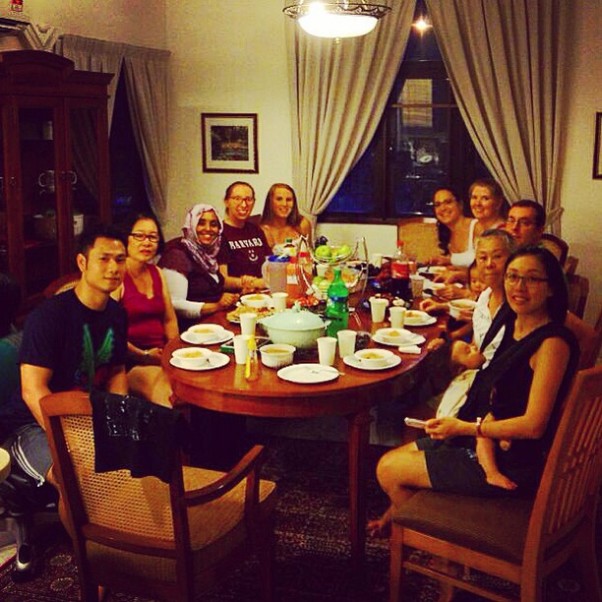