An odd part about living abroad as an expat with the Foreign Service in contrast to the extended travel we used to do on our summer breaks from teaching in Idaho is how routine certain far-flung trip/cities have become. When I graduated from high school almost twenty years ago (is that possible?!) I would never have imagined that a weekend in Singapore would be second-nature and easily booked on a Thursday evening to fly out on a Friday morning. And yet, being assigned to Kuala Lumpur, planning a weekend in Singapore is about as much work as putting together a trip to Salt Lake City would have been. We’ve been there half a dozen times now, and have hit almost all of the main attractions. We’ve been on the night safari at the zoo, visited both the city botanical gardens and the Gardens by the Bay, spent hours sitting and people watching at the base of the merlion, wandered Sentosa and Haw Par Villa, shopped the markets in Little India and lunched in Chinatown and perused the high end shops on Orchard Street. Heck, we’ve even tried out the international hospitals, ophthalmologists and neurologists in Singapore! I think the one major tourist attraction we are missing is the Singapore Flyer, a huge Ferris wheel taller than the Eye of London. Thanks, but no thanks on that one.

But, this last weekend, we got to enjoy it all over again, almost as if for the first time. (Our initial trip to Singapore was in 2007. We were on winter holiday from our small teachers’ college in China where we were serving as Peace Corps volunteers. Along with good friends who were also PCVs in Gansu province, we did a multi-country tour of SE Asia and decided, on a bit of a whim, to hop a long-distance bus from Kuala Lumpur to Singapore for an overnight excursion. Unplanned, but spectacular, it was one of the highlights of that trip.) A good friend of Thad’s from high school came out to visit for two weeks and wanted to add another stamp or two to his shiny new passport, so a trip to Singapore was a great way to get another country and another experience in just a long weekend. Even though we’ve been there a handful of times, this last one stood out because we got to experience it all again, as if for the first time. Garrett was full of boundless energy, wanting to see and do everything the city had to offer, so we tied on our tennis shoes and headed out for two action-packed and long days of conquering the sites of Singapore, shin splints and haze be damned.

It was fun to take in the city again from the perspective of a new traveler. Wanting to see and do more than chill, we booked a budget hotel with small rooms, as we planned to spend little time there. What we didn’t know upon booking was the weekend we stayed would be the hotel’s first weekend with guests. It was brand new! This was great in that that pillow top mattresses were to die for and everything was sparkly still, but there was some evidence that they were still working out the quirks in their building. Morning showers and hot water were a particular issue. While Thad and Garrett opted for quick and cold, I chose the on/off method of conserving water to get maximum heat. To each his/her own. We did “get” to take selfies with the manager for their Facebook page, so there was that…

In two and a half days, we saw as much of the lovely city-state as humanly possible. Thad and I have a special love for Haw Par Villa, a strange and wonderful park on the marina side of town, built by the founders of the Tiger Balm empire. Wanting to pass on traditional Chinese beliefs about spirituality and the afterlife, the park is made up of statues and 3-D murals depicting traditional Chinese tales. A visit through the grounds culminates with a trip to Hell. Literally. The creators put together a slightly horrific and strangely graphic diorama inside a man-made cave that walks patrons through the nine courts of Hell, specifically outlining misdeeds and their punishments before one can drink the tea of forgetfulness and be reincarnated to give this world another shot. Haw Par Villa is strange and wonderful, cartoonish and graphic, all in a single glance.

After going through Hell together, we stuck to a much more cheerful and lighthearted schedule, focusing on the marina area, visiting the Sands Hotel and its ridiculous compound/attached mall area, where I searched endlessly for a merlion charm for my Pandora bracelet, but apparently such a thing does not exist. The air conditioning was a nice reprieve from the heat/humidity/haze of outside, so a turn or two around the shops wasn’t a bad break. The Gardens by the Bay were also on the itinerary for the day, a place we had not previously visited, so the one for which I was most excited. The free parts of the gardens are quite extensive, but we did shell out the Sing dollars to get into the Cloud Forest Pavilion and the Flower House. I was particularly drawn to the cloud forest, as they are talked about extensively in Jonathon Maslow’s Bird of Life, Bird of Death, one of the books I am writing about in my thesis. It was awesome to see that habitat in person, even if it was man-made. It may not be the basis of why I chose that book for my writing, but I’m going to chalk the ticket price up to research anyway!

While I was the one pushing to visit this particular green house, I think Thad and Garrett may have enjoyed it more. The set-up reminded me of the aquarium in Baltimore, where you go to the top of a multi-story building and wind your way down through the exhibits, back to the main floor. In Baltimore, that worked great for me. It was just a series of ramps circling down through tank after tank of fish. The cloud forest was not so comforting for those of us with major fears of heights. Rather than solid floors, the path that wound down was more like a suspension track with woven metal floors that you could see through. Not good. Plus, it moved. Just a bit, but a bit was too much for me. I tried on the top floor to do it, but made it about ten yards before chickening out and heading back to the stairs in the center of the building. I opted to meet my companions on each solid level. Towards the bottom, maybe floor three (there were seven in total), I decided to give the walkway a try again, thinking I could make it happen since we were so much closer to the ground. Did I make it to the next level? I did. Did I see or enjoy a single flower or plant along the way? I did not. Did I nearly run over a lovely Indian family who were camped out doing photos in the middle of the walkway? Shamefully, yes. It seems Maslow at least had the “death” part of the cloud forest right!

Feeling like we were quickly running out of time to see and do everything the city had to offer, on Sunday we opted for tickets on a hop-on/hop-off style bus tour that took us to Little India for some great Deepavali shopping, Chinatown for an amazing xiaolongbao lunch and through the modern financial districts as well as the historically colonial neighborhoods of town. Seeing the city through Garrett’s eyes was rejuvenating, as he loved each and every place we wandered. Watching him barter for singing bowls in Chinatown or search for a taste of durian, it’s great to be along as someone experiences something so entirely different from their normal day-to-day life. It makes me think maybe I should have become a tour guide! The hundreds and hundreds of photos and dozens of videos on Garrett’s phone attest to his newfound love of all things Singapore.

And of course, no trip to Singapore is complete without some quality time with the merlion, so we had dinner down on the marina and enjoyed the perpetually warm nights that come with being mere degrees above the equator.

After my two most recent trips to Singapore having been on behest of my eye, I loved having the chance to go down and take in the sights as a tourist- 100%. There is much truth in the fact that last weekend’s trip really was seeing Singapore through new eyes- both Garrett’s and my own. (Click here for the back story on my previous, less fun and more stressful trips to Singapore.)

Gardens by the Bay with my bae (yes, I went there!)

Terrified of the walkway

Me, waiting on solid ground at the cloud forest

My favorite- the merlion

I was freezing with the mist in the air 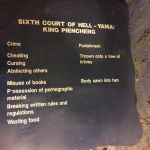 The misuse of books…serious consequences 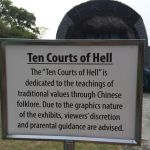 Headed to Hell, together

2 thoughts on “Singapore through New Eyes”