Etched in Sand: A True Story of Five Siblings Who Survived an Unspeakable Childhood on Long Island by Regina Calcaterra 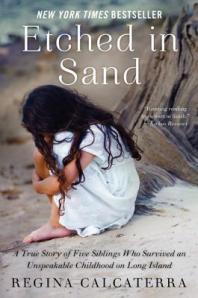 Heartbreaking. It’s the one word that best wraps up Regina Calcaterra’s 2013 memoir of growing up on Long Island with a mother who was truly a monster and a social services system that was broken, leaving five children to raise themselves and each other.

With five kids from five fathers, Cookie is hardly an ideal mother-figure, but add in untreated mental illness, alcoholism and a propensity to physically and verbally lash out at anything in her path and you’ve created a nightmare of a home. Regina, the middle child of the five, lives her childhood being bounced from home to home, staying in foster homes for a time here and there, only to have her mother win back custody time and time again. As the product of the man her mother was most hurt by, Regina bears the brunt of her mother’s anger, being lashed with a belt, hung from a closet rod, kicked and punched and continuously referred to as a slut and a whore from as young as she can remember. Although Regina tries to run away a few times, she realizes that she has to be home to protect her younger siblings, caring for them when Cookie disappears for months on end.

Until, in a moment of pain and utter exhaustion, Regina finally gives in and tells the authorities the true extent of the abuse at home. When she finally comes clean, her family of five siblings, who have lied and stolen and worked hard to stay together as a unit, are separated, which is exactly what they had been working to avoid. Having been the one who “told,” Regina carries with her a massive guilt, as it’s not too long before the social services system returns the two youngest kids to Cookie, at which time Rosie, the baby of the family, takes Regina’s place as the ultimate scapegoat, enduring humiliating abuse and degradation for years.

Not able to do anything to help her younger brother and sister, Regina follows the advice of some caring teachers who remind her that education is the only way out of the life she was raise in. She works hard through high school and eventually gets accepted to university, where her life is filled with classes, the gymnastics team and working multiple jobs to be able to not only support herself, but secretly send money to Rosie, who is now living in horrible conditions in Idaho with Cookie and her newest male companion.

It’s heartbreaking and unimaginable that an human being could treat another in such a vile way, but Regina and her siblings are an amazing story of a family who does its best to look out for each other, individuals who pursue their own paths to a happier life and one woman who works hard to become a part of the system that failed her as a child, empowered to make the changes needed so that future foster kids don’t have to suffer the way she did.

This was another midnight-nothing-to-read library download for me. (It’s what happens when I don’t have to set an alarm and I finish a book with nothing pre-downloaded. I go to the Boise Public Library e-books page, sort through the “now available” titles until I find something random that look interesting and off I go. It’s a bit like playing Russian roulette with literature!) Not coming off a recommended reading list, a new release list or a review from a friend, this turned out to be a good pick. Regina Calcaterra’s Etched in Sand: A True Story of Five Siblings Who Survived an Unspeakable Childhood on Long Island is not an easy read, but one that reminds us all that it is possible to overcome the odds, even when the chances seem impossibly slim, earning it:

2 thoughts on “Etched in Sand: A True Story of Five Siblings Who Survived an Unspeakable Childhood on Long Island by Regina Calcaterra”