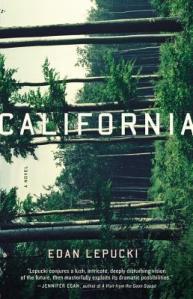 How far would you be willing to push the line between right and wrong to ensure your own safety? What options would be on the table if it meant keeping your spouse and unborn child protected? At what point to the heinous choices of others become too much and you break off the relationship, even if it is providing you with the basic necessities for survival? Edan Lepucki’s new novel, California uses a post-apocalyptic outer Los Angeles setting to address these questions, creating a world where black and white are no longer distinguishable amongst the thick gray swath painted by the morals and ethics of personal survival.

Reminiscent of The Road, although less bleak and not as beautifully written, California takes place in the near future, when much of the United States has been destroyed through a series of natural disasters, followed by widespread crime and violence. As the infrastructure of cities begins to breakdown, those with the means to do so are willing to pay for protection in the form of Communities- self-contained areas that promise tranquility and peace through heavy vetting of residents and high costs for inclusion. Those without the money to buy their way into these new establishments are left to fend for themselves, some remaining in the decaying cities while others strike out on their own in the wilderness.

Cal and Frida are part of the latter. After Frida’s brother dies as a suicide bomber in the city, she and Cal realize there is no place left for them in “civilization,” so they embark on a journey into the woods where they hope to create a new life for themselves. Soon though, the desire to be with others is overwhelming and after hearing of a larger community of settlers just a few days hike away, they set out to find their neighbors. Having been warned away from this group, they are nervous, but especially Frida, who believes she is pregnant, can’t stop her curiosity of what might be just over the ridge.

What they find is a surprise on many levels. Now, they must decide if they want to be a part of this reclusive settlement (if the members will even have them) or if it would be best to go back to their small cabin and continue on their own. The longer they stay and the more they learn about this functioning outpost, the harder their decision becomes and the less in sync with one other the tight couple grows.

Lepucki forces the reader to confront a series of philosophical conundrums, both about what it means to be a family and at what point the price for security is too high. With no tightly tied up happy ending, the novel leaves the reader to put themselves in this near future setting and wonder what choices they would make and at what point it would all become too much. Although the basics of the post-apocalyptic plot aren’t’ new, the twists and turns and ethical challenges help Edan Lepucki’s debut novel, California, earn a solid:

One thought on “California by Edan Lepucki”