Skin and Bones by Sherry Shahan 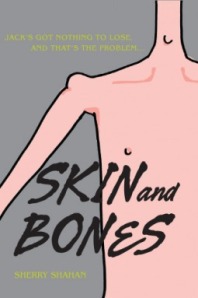 Between work and travel, I’ve been terrible about posting book reviews lately, but that doesn’t mean I haven’t been enduling at my normal rate; I’ve just been too busy (lazy) to do write up my thoughts on them. Recently, I’ve been reading a lot of YA literature again, missing my middle school roots. Skin and Bones by Sherry Shahan is one of those recent reads and is definitely different from its counterparts.

Shahan’s book focuses on teenage eating disorders, but earns it’s distinction in that the main character struggling with anorexia, is male- Jack (aka: Bones). His “sidekick” throughout the book is a boy on the opposite end of the eating spectrum, who has nicknamed himself Lard, as he says it is better to give yourself the nickname then let others dictate it. So often, young adult fiction that zeros in on the world of eating disorders focuses only on the anorexia/bulimia side of that world and within those boundaries, looks primarily at female sufferers.  The fact that the two main characters are male is this book’s saving grace.

That is where my love of this book ends. There are just too many gaps in the storyline and too often I felt like I was missing a page of the book. For example, early in the book, just after Jack checks in to the eating disorder unit (EDU) at his local hospital, he attends a group therapy session, where everyone is given a writing assignment. After the session, he is invited to spend time with some of the other patients, but says he wants to go to his room to write. The next thing we know, he falls asleep and it is suddenly morning. The flow of the timeline is just off. As I read this section, I felt like I had skipped a page somehow. I even checked and rechecked the page numbers on my e-reader to make sure I hadn’t flipped too many at once. But no. There was no in between action.

There was one plot point that really caught my attention, and then only earned about four sentences of exploration. When Jack’s parents come to the family day held by the EDU, his mom makes a comment about having starved herself for a week to try to understand what Jack was dealing with. She then mentions how at first she was hungry, but as the week went on, she felt voices encouraging her to be strong and felt a bit of power at denying herself the food. This seems like it could be a fascinating look into the psychology of eating disorders, but it is quickly swept under the rug. Disappointing.

While I love that Sherry Shahan broke new ground with her male-centered story of eating disorders, in the end, it wasn’t enough to make up for the glaring gaps in plot and overall flow of the story. I am hoping that Shahan continues to write young adult novels, creating stories based outside the traditional writing on some important teen topics, and hopefully the flow will come as she grows in the genre. I will definitely pick up the next thing she writes, but as for Sherry Shahan’s Skin and Bones, it only earns: