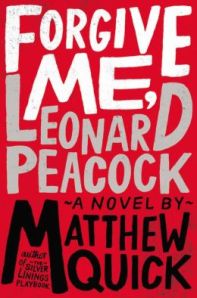 Amazing and heartbreaking. Those are the two best words I can come up with to describe Matthew Quick’s newest novel, Forgive Me, Leonard Peacock. I downloaded this book just two days ago, flying through it as I couldn’t bear to walk away from Leonard, the protagonist, as he stumbled his way towards a heart wrenching decision.

The story opens as Leonard gently wraps his World War II Nazi-owned handgun into a pink birthday box, figuring even if he were stopped going into school, no one would suspect anything evil beneath the cheery paper. He’s had years to think about the choice he is making and has decided that this world holds no promise for him, but before he ends his own life, he has a few errands to take care of, namely giving a few gifts to those he felt closest too and then killing Asher, the person who he feels most drove him to the final decision of his life.

As Leonard goes through his final day on Earth, he says his goodbyes in the only way he knows how, worried more about how his Holocaust teacher will feel about his death than his own mother, who is distant and fully wrapped up in her life as a designer, rarely even coming home to see him. (His father fled the country due to tax fraud charges, so in all practical ways, Leonard has no parents. He’s a modern-day orphan.) When a few adults at school notice and call him on his odd behavior, he puts on the happy face, the one he thinks adults expect from teens and weasels his way out of tough conversations.

Each turned page in the book takes the reader one step closer to Leonard’s inevitable end.

Matthew Quick has written an extraordinarily powerful novel about teenage depression and pain, one that will resonate with many high school students. As he wades through topics such as incest, rape and suicide, Quick humanizes these horrors, reminding the reader that we are all so much more than we appear on the outside. We’ve all got back stories that are unknowable to the casual acquaintances in our lives, but by looking closer at those around us and really trying to understand the demons they may be fighting, we can give strength to others, helping them feel powerful enough to fight another day.

Forgive Me, Leonard Peacock is definitely not an easy read, but it is an important one. Since it deals with difficult topics, it is not one that I would just put on my middle school bookshelf (although I would keep a copy to give to more mature readers) but I would definitely have copies in a high school English classroom.  Quick’s talk is a powerful one, reminding us that we are more than our suffering, but also that we owe it to those around us to remember that there is more to each of us than meets the eye. Without a doubt, Matthew Quick’s recently released novel Forgive Me, Leonard Peacock earns: