The Big Burn: Teddy Roosevelt and the Fire that Saved America by Timothy Egan 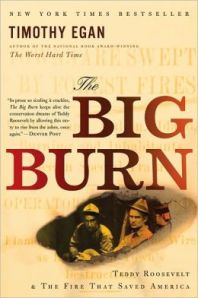 For the longest time, all through high school and college, I shied away from non-fiction books that weren’t on my required reading lists. My image of non-fiction was one of drily written tales that read like epic encyclopedia entries; just the facts, ma’am. But, about seven years ago I stumbled upon Devil in the White City by Erik Larson, turning my notion of non-fiction writing on its head. (Stumbled upon isn’t entirely accurate. I was a Peace Corps Volunteer in western China, starving from a lack of reading material and was handed this book. Whereas a year before I would have turned my nose up at it, literary deprivation had taken hold and I devoured the paperback, cover to cover, in just two days.) Since my introduction into the new world of non-fiction, I’ve read everything from real-life accounts of floods in Pennsylvania (The Johnstown Flood  by David McCullough) to adventures in the far reaches of the Amazon (The Unconquered by Scott Wallace), not to mention a bevy of memoirs.

My most recent foray into the world of non-fiction was The Big Burn by Timothy Egan, a tale of the birth of our national park system and the fire that nearly destroyed it. As a frequenter of the American national parks, the book drew me in with the history of how these lands were set aside and preserved for future generations, which was no easy task as industry leaders would rather turn a profit off the wood and minerals available, building a dynasty for their family, rather than create a lasting legacy for the entire nation. Egan does a great job giving the background of this fight, leaving the reader feeling like they “knew” Teddy Roosevelt and Gifford Pinchot.

In the last decade, non-fiction has become highly readable. No longer does one feel like they need to be a subject matter in the topic at hand before picking up a history-based book. Egan continues to add to this recreated genre- writing a book about the birth of our nation’s beloved parks that is ideal for anyone who has ever set foot in the wilderness of the northwest. While the disastrous mixture of the greed of the eastern seaboard barons and the big burn nearly destroyed the burgeoning forest service and all Pinchot and Roosevelt worked for, the author is able to spin the tale in such a way to create hope on the part of the reader, ending with a sense of better days, rather than the one of despair that could so easily take its place. Timothy Egan’s The Big Burn earns: