Catherine the Great: Portrait of a Woman by Robert K. Massie 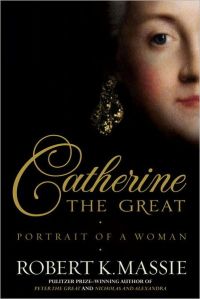 If it is drama you crave, Russian history is probably one of the best non-fiction outlets for your desire.  It is filled with love and betrayal, possible marriages and definite assassinations, and intrigue beyond what Hollywood can manufacture. Catherin the Great: Portrait of a Woman covers all of these possibilities, as well as a glance at ancient frenemies, haters, posers and every other modern label for the spectacle-loving folks!

Catherine, originally Sophia, born in 1729, had ties to European nobility through her mother, but it took a summons from Russia for her to ascend to the rank of empress. But such a monumental climb would take years, as well as royal amounts of patience on her part. After her betrothal and eventual wedding to the decidedly undesirable (both in physical and emotional contexts) Peter III, Catherine is forced to bend to the will of her over-bearing mother-in-law and her immature new husband.

After the death of Empress Elizabeth, it quickly becomes apparent that Peter is not fit for the throne. He doesn’t have the intelligence, the interest or stamina one would need to rule a country as large and diverse as Russia in the mid 1700’s. With his true love remaining in his native Europe, Peter aligns himself with countries out of nostalgia rather than through a determination of what is strategically the best for his adopted country. When this mindset of ruling starts to show cracks, it doesn’t take long for the strong-willed Catherine to step in, take control of the court and crown herself Empress Catherine II.

Catherine the Great follows the empire-leader from the time she was a young girl, a mere teenager, called away from her family by the Empress Elizabeth to be the wife of the empress’ nephew and future successor, Peter III, to the stroke that eventually took her life. Throughout these decades, readers are treated to not only Catherine the Great’s political dealings, but her personal triumphs and failures as well.

Massie’s book has an extraordinary amount of detail in it, which is both its top asset, as well as one of the biggest detractions. While I was fascinated with where Catherine (then Sophia) came from and her rise to power and fame, at times the digressions into history, philosophy and personal dalliances became a distraction to her tale. While there is no way to whittle the life of a royal down to a few hundred pages, I feel as though Massie could have edited some of the divergences, which at times rambled down paths that, while illuminating specific points of Russian history, were not necessary for the reader to understand Catherine’ s trek to the throne.

With much of my Russian history being the much more current studies in most curricula today, including the time of USSR and the Cold War, Catherine the Great was a fascinating tale of one woman’s triumph over a deadbeat husband and her rise to the ultimate seat of authority. Robert K. Massie has crafted a biography that reads as smoothly as a work of fiction, drawing the reader in to the tale of the ancient Russian royalty’s inner lives and political leanings. While I believe a bit of editing would have created a more finely tuned tale, Massie’s Catherine the Great: Portrait of a Woman is a solid biography of a bold woman, earning it: