The Impossible State: North Korea, Past and Future by Victor Cha 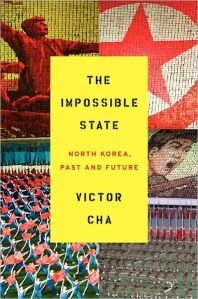 It has probably become apparent by now that I am fascinated with North Korea and how such an isolated country can still exist in this world of ever-increasing abilities to communicate with people from around the globe. (I write this review from my couch in Chengdu, China, where I just got off Skype with my parents who live in Idaho, have emailed several friends back in the States and caught up on world news via a variety of online newspapers. I know what I am talking about when it comes to being connected!) Recently, I reviewed Escape from Camp 14 which was a memoir of one man’s time in the horrific camps of Northern Korea. The Impossible State is quite a different look at the country- taking an in-depth approach to everything from the history of the country to detailed looks at each of the Kim family members who have ruled throughout the last decades to the economy as it is today and why it can’t sustain itself.

Victor Cha’s new book is filled with fascinating insight into North Korea, but it reads more like a college textbook than an average non-fiction book published for the run-of-the-mill reader would. I especially enjoyed the chapter on the Kim family and how each successive leader had to create a place for himself within the government, but at times the information seems to get bogged down in technical language that isn’t necessary. It is almost as if the book is trying to push itself to be picked up by professors of classes about the Koreas, thereby helping it reach a higher profit margin.

The other thing that I really struggled with while reading Cha’s book was the writing itself. Yes, I feel that it was too textbook-y, but maybe I just wasn’t the intended reader. I found the book at the library and picked it up because it looked interesting, but maybe Cha was really pushing for a more academic setting for his research. Being written in a technical manner doesn’t mean, though, that it can’t be well-written and well-edited. There were many times throughout the book where the writing just became ungainly, with confusing modifiers and the occasional antecedent left to hang on its own.  More than once I had to reread sentences and paragraphs, not to tackle difficult vocabulary, but to decipher the meaning behind poorly edited writing.  Going back to my days of Six-Traits Writing instruction, I would say Cha really needs have someone help him focus his organization and conventions.

This newly released book is great because the subject is so relevant, as North Korea’s new constitution just named it as a nuclear-power, thereby trying to bully its way into international talks and aid. The research and discussion is current, dealing not only with Kim Jong-Il, but also his successor, the country’s current leader, Kim Jong-Un.  In a world that is as politically fluid as is ours, it is rare to get such a contemporary viewpoint. It seems as soon as books are published, the landscape has changed and they are out of touch with this moment’s crisis.

I enjoyed this book, but I think a lot of that had to do with my inherent interest in the topic. The book is filled with fascinating insights into what is easily the world’s most isolated and possibly most brainwashed nation, giving the reader both facts and theories about where the country has been and where it is headed. The writing itself leaves something to be desired. Victor Cha’s The Impossible State earns: