Mr g: A Novel About the Creation by Alan Lightman 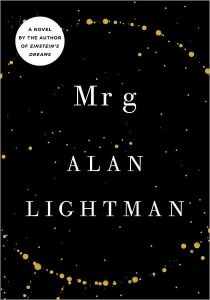 Science and religion have differing views on how our world came to be what it is today. Some argue that a giant explosion, long, long ago created the basis for the life that is now sustained by our planet, while others believe our existence is due to an omniscient, omnipotent power larger than we can imagine. Alan Lightman’s latest creation, Mr. g follows the creation of a universe and planet from their inception to their final destruction.

The title character, Mr. g, has been living in the Void with his aunt and uncle for time unlimited. There was nothing before him and nothing without him. Before deciding to create order in a small corner of the Void, time didn’t even exist, but he dwelt indefinitely in the nothingness.

Mr. g undertakes the creation of a galaxy by laying out some basic laws and then allowing those laws to dictate what happens with the matter within the realm. After a time, he decides to focus his attention and energies on a single planet- one he names Aalam- 104729. Over time, this world becomes inhabited by every more complex and complicated forms of life. Mr. g, at the request of Belhor, another roving being of the Void, stands back and doesn’t interfere with the burgeoning world. (Belhor, on the other hand, feels no such compunction on his own account, and meddles from time to time.)

Lightman’s background as a theoretical physicist and his adept writing skills allows him to create an intriguing novel based on a strong factual foundation. As the science of the creation of a universe unfolds, Lightman isn’t pushing for a choice between the Big Bang and Creation theories. Mr. g builds a galaxy in which both schools of thought sit neatly, side by side.

Beyond the science though, the writing is what really stood out to me. It is beautiful. Through his words, Lightman creates a spectacular scene of stars coming into being and burning out over millennia. I never imagined atoms and particles and bits and pieces that create life to be so astoundingly poetic. At one point, Mr. g’s aunt decides she wants a gift, something not from within the Void. Mr. g and his uncle create a dress for her out of the stars of another galaxy. I am not sure how Lightman pictured this dress in his mind, but in mine it is a spectacular frothy frock backlit by twinkling stars. The dress is Paris couture at its finest!

The premise of the novel is a unique one and as a reader, you must find a way to put yourself in the Void with Mr. g. Once that suspension of disbelief is allowed to take place, this book is like falling through space. There are wonders to be found on each page as Mr. g creates, watches over and eventually mourns the loss of his first universe. Alan Lightman’s novel Mr g: A Novel About the Creation is a masterful work of art, blending science and literature in a way that few fictional books are able to, thereby earning it: