Behind the Beautiful Forevers: Life, Death, and Hope in a Mumbai Undercity  by Katherine Boo 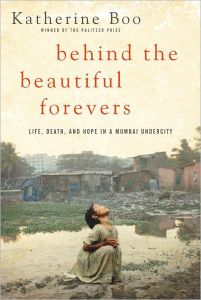 Behind the Beautiful Forevers is a powerful look at what a vast number of people face on a daily basis, just to make it through to see the following day. This book takes any romantic notion of poverty that may still exist in the reader’s mind and destroys it completely.

For the Indians living in the slums surrounding Mumbai’s international airport, nothing is easy, nothing is straightforward and nothing can be relied on. In Annawadi, difficulties are thrown at these people daily. Everything from finding enough recyclable trash in the heaps of garbage surrounding their lashed together sheet-metal homes to sell and make a little money to buy a bit of food for their families to contentious neighborhood relationships seen through the eyes of both caste and religious systems become battles that are waged and fought day after day after day.

Katherine Boo’s book follows a handful of characters, varying in age and background, through these difficulties. One family is dealing with false accusations after a jealous neighbor self-immolates and then, before dying, blames her suicide on a family that was starting to prosper. The husband, as well as a son and a daughter, are imprisoned on these charges, as the mother has to navigate the corrupt judicial system of the Indian government. One woman decides the only way she can improve her situation is by becoming the slumlord, but to achieve this goal she must push aside any inklings of empathy or concern for others. Slumlord-ing is a dog-eat-dog world and she is set on becoming the only dog left standing. Another young lady decides that eating rat poison is the only way to achieve the freedom she desperately desires. And the parade of desperate people forced to make desperate choices continues.

Boo’s book is the epitome of narrative non-fiction. Her story is told so well, with so much detail, that for the first few chapters, I was actually a bit confused about what genre I was reading. I thought for sure I had seen in the summary of the book that it was non-fiction, but some of the characters are so outrageous and the setting is so destitute that I thought I must have misinterpreted what I had seen, that this must be created entirely from her imagination. The writing flows like that of a fictional story, with touching dialog, detailed descriptions and a voice that is usually associated with storytelling.  This book rips off any rose-colored glasses through which the reader may still view poverty, throwing them into the heaps of garbage that Abdul and his friends are forced to dig through each day, just to earn enough rupees to keep their families afloat. There is no romanticism in Boo’s tale, but rather a stark, unblinking look at how many of the world’s unfortunate are forced to scrape and scrabble their entire lives, just for the chance to maybe make their kids’ or even their kids’ kids’ lives just a bit better. Katherine Boo’s  Behind the Beautiful Forevers earns: