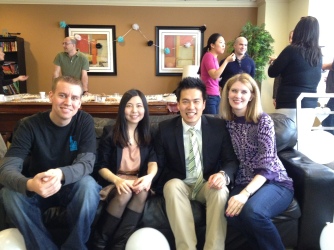 Bridal showers. Baby showers. Even rain showers. As I’ve mentioned before, I’m good with them all, as long as games aren’t involved. Throwing a shower for someone is a great way to help them get off to a great start on a new era of her life, whether it is because of impending nuptials or the arrival of a squawking bundle of joy.  This past weekend, I had the opportunity to help plan and throw a wedding shower for two very good friends.- John and Lulu.

John and Lulu met in China while he was a Peace Corps Volunteer. (Shout out to Peace Corps China!) Before he returned to the States in late May to begin the Foreign Service Officers training, in the same class as Thad, he asked Lulu to marry him.  Their engagement had to be a long distance one for the next half a year, as he was here in DC doing his training and preparing to head to Taiwan on his first assignment and she was home in Guizhou province in China. Luckily, John was able to fly to China over Christmas, where they were married, and return with Lulu to start their new lives together.

We not only wanted to help this wonderful couple put together the foundation they will need to establish their own home, but we wanted to welcome Lulu to America with open arms. What is a better way to do that than throw them a traditional wedding shower?

Along with Molly and Jessica, I set about putting together a small gathering for John’s friends and FSI classmates. We were able to reserve the activities room herein Crystal City Oakwood, which was the perfect size to hold the roughly twenty-five people who came to celebrate.  As invitations went out, we not only received an overwhelming number confirming attendance, but also numerous offers to bring food and drink to the party. It was wonderful to see so many people happy and excited for John and Lulu, wanting to contribute to the festivities as a way to honor them and their marriage.

As Saturday rolled around, in true worrywart fashion, I was awake with my mind reeling at 6:30 in the morning, a mere four hours before the commencement of any activity. As I lay in bed, I had these terrible thoughts about what if I didn’t really reserve the room (even though I knew I had, since I had checked with the front desk on several occasions to be sure it was on their calendar), what if no one came (ridiculous, as our RSVP list was extensive) and what if we don’t have enough food and drink for everyone (again, ludicrous since we ended up with enough left over to do it all again!) ?

Needless to say, the morning went off without a hitch. There were balloons and streamers and garland; there were cookies and muffins and salmon mini-sandwiches and cupcakes and veggies trays galore; there was hazelnut coffee and regular coffee and juice and limeade and champagne; there were wrapped gifts and bagged gifts and enveloped gift cards. There were no games.

That, my friends, is the best part. No games. The bride was not embarrassed by having to wear bows on their head, representing the number of kids she would have. There were no wedding dresses or veils made from toilet paper. There were no awkward moments where the groom has to try to remember what color of toothbrush his blushing bride uses.  There just a lot of eating and a lot of chatting and a lot of friends spending time together in recognition of a fabulous new couple.

I am pleased to have been able to be a part of the planning for this occasion.  While a shower isn’t the same as a full-blown wedding, it was a great way for us to all gather and extend our wishes for happiness to John and Lulu. Saturday’s event was a success, thank to everyone who helped plan, who helped provide food and who helped set-up and take down.

Next up? Baby shower for Rory!

3 thoughts on “Here Comes the Bride”