The Maze Runner by James Dashner 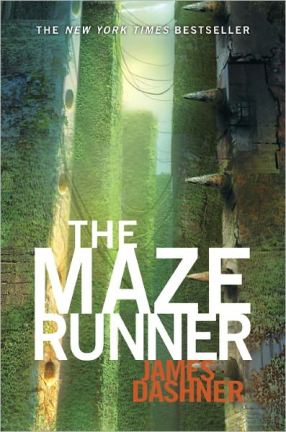 A decade of teaching middle school has left me with a deep and abiding love of young adult novels. The YA genre has really gained steam over the last ten years, with much of that energy going into great literature that allows students, along with the novels’ protagonists, to explore the ups and downs of adolescence, to consider a variety of ethical and moral dilemmas and to hopefully expand their horizons in terms of culture and lifestyle.( At the same time, the genre has also opened the door to a ridiculous amount of vampire and werewolf novels, but I’ll take the spin-offs on each popular novel if it means kids are engaged and wanting to pick up books.)

The Maze Runner by James Dashner falls into one of my favorite YA categories- dystopian science-fiction. Ever since I picked up Ender’s Game years and years ago, I’ve been drawn to books that imagine a future world where life has been significantly altered through a series of catastrophic events. The Maze Runner is a great addition to a genre that includes The Giver, City of Ember and The Hunger Games.

Dashner’s novel starts out as the main character, Thomas, arrives in The Glade via an elevator from an unknown origin. Having only cursory memories of life before his appearance, Thomas is confused by his new whereabouts, but also somehow more comfortable with the transition than his predecessors.  His ease in this new home not only creates confusion on his own part, but leads to suspicion on the part of the boys already dwelling in The Glade.

The Glade is a large courtyard surrounded by high stone walls.  It isn’t long before, like any teenage boy, Thomas is questioning what lies beyond the boundaries of those walls. He quickly learns that a select group of Gladers venture into that unknown territory each day in an attempt to map the ever-changing maze patrolled by deadly Grievers.

No one seems to know why The Glade exists or whether an escape is possible, but prior to Thomas’ arrival, the Gladers could expect weekly shipments, via the elevator, of necessary goods and a monthly addition of a new boy. Thomas’ arrival changes all of this, as just one day after joining The Glade, another new member is added to the band of boys- a girl. She will turn everything the all-male society knows on its head and throw into motion changes that will alter everything they think they know about their home.

The Maze Runner is a captivating start to James Dashner’s trilogy. While the book initially gets off to a bit of a slow start as a foreign setting has to be introduced, the book was well-worth sticking out the long beginning and knowing that two more follow, the time devoted early on to setting will hopefully payoff throughout the two subsequent novels. There are moments in this book that harken back to Golding’s Lord of the Flies and the difficulties a band of teenage boys would face in forming their own society, but The Maze Runner heads in a whole new direction, taking the character most like Piggy and turning him into a hero and showing that order can be formed from an utterly puzzling starting point.

With a dystopian premise that I am so drawn to and the promise of two more books that I won’t be able to put down James Dashner’s The Maze Runner earns: