State of Wonder by Ann Patchett 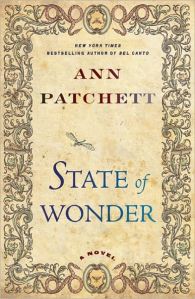 As with many of the books I read, I was first drawn to this novel by an online review I happened to stumble across. The premise of a lab-bound doctor venturing into the unknowns of the Amazon basin on behalf of a huge pharmaceutical company was one that contained the potential to go in so many directions, I just had to find out which overgrown jungle trail Patchett would follow.

State of Wonder is an interesting mix of a fictional adventure/travel genre and a more literary discussion of a large drug companies’ ethical responsibilities vs. its bottom line. The main character, Dr. Marina Singh is sent to Brazil on a double mission: first, to find the reclusive Dr. Swenson, who is supposed to be working on a game changing fertility drug, but refuses to enlighten her employers on its development and second, to find out just exactly how her predecessor, Anders Eckman,  in the previously mentioned mission died and what has become of his remains.

Once she arrives in Brazil and wheedles her way past the gatekeepers Dr. Swenson has employed to keep any and all curious outsiders from finding her and her research station, Dr. Singh discovers that nothing is quite the way it was presented to her back in Minnesota. The drug research, while happening and making huge progress, is not what her employing pharmaceutical company thinks it is, Dr. Swenson is pushing natural boundaries to a breaking point and there is more mystery to the demise of Eckman than anyone in the States knows.

I am always excited to open a new book. Sometimes the start of a new novel takes time to develop, slowly going through the machinations of time and place and character. Occasionally, I’ll happen upon a novel that, from the first paragraph, winds me tightly into its coils like a monstrous anaconda in the Amazon. For me, Patchett went all in and showed her hand on page six with when Eckman, an avid birder, is preparing for his trip to the wilds of South America by pouring over field guides of rainforest aviary. As he describes the reclusive Amazonian dwelling guira cuckoo and the plumage that bedecks its head, Patchett writes, “A person could wash out the inside of a pickle jar with such a bird.” After wiping away the tears that stemmed from laughing so hard at that line, there was no way I was going to be able to put down the book down until I had seen it through to the end.

For the thoughtful mixture of a travel adventure and the philosophical discussion of humanity’s ethical responsibilities towards one another earns Ann Patchett’s Sense of Wonder earns:

2 thoughts on “State of Wonder by Ann Patchett”