With the Fire on High by Elizabeth Avecedo 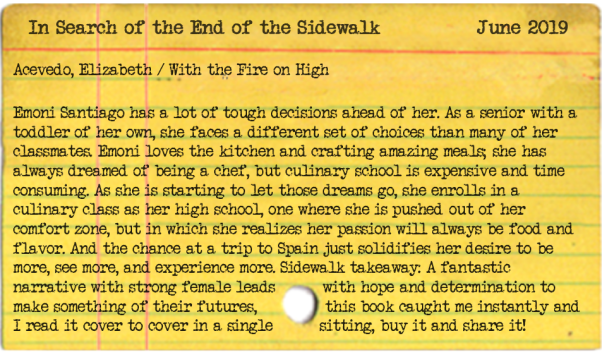 Purchase With the Fire on High here 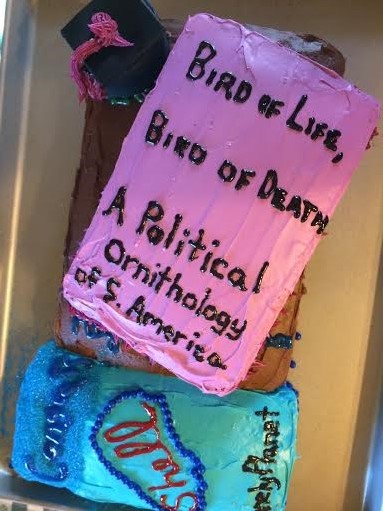 This is not going to come as a shock to those of you who know me well, but I’m just stating the facts. I am not a cook, a chef, a baker or any other synonym for one who makes food. My idea of cooking is going online and ordering food to be delivered to my house. (I’m so far away from being a cook that even calling in an order on the telephone is too close to actual food preparation.) When I open those steaming packages of take-out, it counts as cooking in my book. Whenever there was a family event that involved everyone bringing something to add to the spread, I always tried to be first to reply to the invitation email so I could call dibs on the potato chips if it was a barbeque or the rolls if it was a sit-down dinner. Either way, the “cooking” involved dropping by Albertson’s grocery store on the way to the meal, running in and getting my assigned item and heading out to where the real food was being prepared. Even Thanksgiving, which we were kind of in charge of on Thad’s side of the family, I got out of the real work by offering up my giant kitchen (which was pristine, since it never got used) and buying the bird and fixings. It was a price I was more than happy to pay.

It was a system that was working out pretty well for me when we were living in Idaho, because I had enough real cooks around me that I could always fall back on their food creations for a  real meal once in a while. My parents are always good for a meatloaf or grilled burgers, especially when my brother, the baby of the family, calls up and requests dinner. All I have to do is piggy-back on his call. My sister-in-law is always trying out new recipes and has a dining room table big enough for a few extra diners.  And I am assuming my older sister knows that all holiday meal gatherings are eventually going to end up at her house. It is part of her predestined roll as the oldest child. (Don’t worry Melys, I’ll bring the rolls!)

But what happens when I am just under 10,000 miles away from home and want to make a homemade birthday dinner for Thad? Usually I just suggest a lasagna dinner from either his mom or my mom, whoever asks about his birthday first. This year, a mom-sanga wasn’t an option, so I thought maybe it was time to step up to the plate and figure out how to make a “real” lasagna dinner myself. (“Real” gets put in quotation marks because everything is relative in China. You do the best with what you have here.)

With the goal of homemade lasagna in mind, I took the subway to a new supermarket in town that has a lot of western goods available. For a price. But that is a whole different story.  Last time I was there, I noticed the butcher block at this store had some decent looking ground beef, so I picked up a few small packages of that, along with lasagna noodles. I already had mozzarella cheese, which we buy in bulk from a different store in town, then cut up into blocks and freeze. My back bedroom, which is filled with random goodies from Costco had a couple jars of spaghetti sauce, which I figured could be a stand in for the tomato sauce. I looked all over but couldn’t find any ricotta cheese, cottage cheese or sour cream, but again, this is China-style lasagna.

Sunday was Thad’s actual birthday, but he wasn’t feeling super great, so we put off the homemade dinner until tonight. I made sure to have everything at work wrapped up right at four so I could skitter out the door and head home to get dinner in the oven. I remember from watching my mom make lasagna about a million times that it is a bit of a process.

It is less of a process when you make the “easy” version. Apparently, the noodles I bought (the only ones the store had) are pan-ready, which means I didn’t have to boil them before making the meal.  That saved me one step! Plus, having less ingredients made the whole preparation a little faster than I expected.

After cooking the ground beef (which was actually decent quality- no chunks of fat or slivers of bone to be found!), and adding the spaghetti sauce, I embarked on the Lincoln-Log-esque process of building the lasagna, layer by layer. I started with sauce on the bottom of the pan, thinking that would help cook these strange oven-ready noodles I bought. Then came noodles, burger-mix, cheese and back to noodles.

Italy isn’t going to come calling anytime soon, asking for my recipe to add to their national cookbook, but I do have to say I was rather pleased with the results. Many times I start these cooking projects with high hopes, only to have my dreams of a homemade meal come crashing down, but tonight, it actually worked out. Not only did the lasagna *look* like a lasagna, but the taste was a pretty decent replication as well. It wasn’t my mom’s lasagna, but it wasn’t a total embarrassment either!

And, guess what we’ll be having for lunch tomorrow. Birthday lasagna- China style! (With just the two of us, I still have 2/3 of a pan left.)