The Magician’s Elephant by Kate DiCamillo 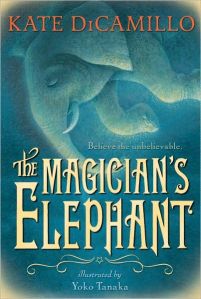 While the length and the pictures in this book give it a decidedly upper elementary school feel , the fact that it is written by Kate DiCamillo, the author of Because of Winn-Dixie was all the recommendation I needed to originally pick it up. (By pick it up, I mean download it from my local library. Oh technology these days…) I am glad that I didn’t let this book’s outward appearance deter me. It can be easily read by younger readers, who will enjoy the fantastical story of a fortuneteller’s prediction that an elephant will reunite a young orphan boy and the sister he believes is dead, but there is so much more to the book than that.

The main character in the story, a young man named Peter. Peter is an orphan, his father having been killed in war and his mother having died during childbirth. He is raised by a man who was a solider alongside his father, but raised is probably not an accurate verb. He is being trained, tutored and school (although not well) in the ways of soldiers.  One day, while in town on errands, Peter spends his only coin at the booth of a fortuneteller.  This woman tells him that an elephant will help reunite him with his sister. This prophecy evokes many emotions, confusion being a primary one, as Peter has always been told his baby sister never breathed a breath of air, but was stillborn. On top of that, he lives in a small eastern European town, far, far away from the lands where elephants dwell.

Days later, once again in the town market, Peter overhears some adults talking about how a magician conjured an elephant the previous night at the opera house. With the world “elephant” tickling his ears, he realizes that it is possible that the soothsayer’s divination is true, meaning his guardian has lied to him all these years about his younger sister.

Peter realizes that “What if?” and “Why not?” are questions that he should have been asking all along.  These become a bit of magic in his own life, pushing him and others to follow the words of the woman in the marketplace, to allow an elephant to reunite his small family.  The characters that get on board with Peter and his belief are compensated with all manner of rewards ranging from finding a true family to returning home to the less visible, but most important one- forgiveness.

The setting of this book very much has a fairy tale, Christmastime feel to it. Winter has descended on the small market town and the chill in the air lends a sense of the story being both of this world, but not quite a part of  the day to day world in which we all live. An elephant falls from the sky, a magician is jailed and a young boy has the chance to find his long lost sister. All possible, but none probable.

The fairy tale setting adds to the readability of this book for younger students, but it also adds an air of mystery for those of us who have torn a few more pages off of the calendar.  The book checks in with fewer than 100 pages, but those pages kept me transfixed in this other world of winter wonderland beauty and elephant-astic fantasy. Kate DiCamillo’s The Magician’s Elephant earns:

Follow In Search of the End of the Sidewalk on WordPress.com